Fruits of Lectio Divina - May 17 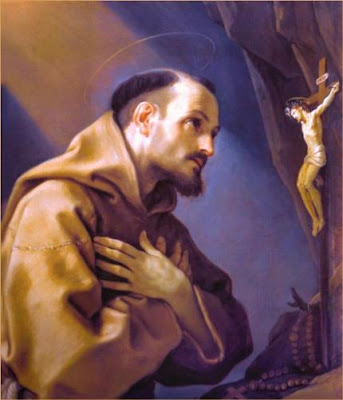 'Blessed is the man that is found without blemish'.

A great deal of money and time is spent by mortal men on creams, ointments, adornment and finery in an attempt to make the weak decaying body appear flourishing and delightful to the eye. Man in his foolishness consumes his day in searching out trivialities and follies, yet will not lift one finger in the pursuit of eternal life. In his quest for riches and treasures, he is no more than a dumb beast. The lack of spots, pock marks and wrinkles do not make a man pleasing in the sight of God, who cares more about the heart of the man that He does about his appearance, which lasts for this age only.
How often do we mark our immortal souls with stains, all for mere delight in things even lower than ourselves? Not only do we disgrace our souls, we absurdly guard our iniquity with lies and excuses and submerge ourselves even deeper in filth. This body, good as it is, will decay and return to the dust from which it came, while the life giving principle will be judged according to what it has loved and how it has acted. We would not knowingly choose to be of unseemly countenance, so why would we desire for our souls to be tarnished through empty pursuit and trivial gain?
We can not pay our ransom through our own merits or wealth to God for our souls, we must call on the name of the Lord.
From this mass of perdition, very few godly souls emerge who have cast off what seems appealing, have denied themselves for the sake of truth and justice and have entered the way of the Cross. These blessed few have scorned earthly riches and have received a pearl without price, which is being stored up for them in Heaven where no thief can ever break in and steal nor moth eat away at to destroy. They have repudiated the allure of the crowd and they will sit down to dine with Abraham, Isaac and Jacob as sons of the Father, fellow heirs to the Kingdom. Eternal glory will be theirs.

Saint Augustine wrote that man can love according to three levels:

1) Those things that are below him. Animals, riches, possessions of various kinds. Also, one may include 'aspects' of human persons, particularly the flesh that is sought after in isolation from the whole substance.
2) Those things equal to himself. Other human persons.
3) Those superior to the nature of man. Principally God, and also the angels.

The fool in his corrupt ways, becomes confused, clings to what appeals straight away to his vision, embraces these relative goods, drains them of their worth and departs even further in misery. The saint loves all things for the sake of God, who is His reward and who is loved for His sake alone. The just man does not seek that which is not in accordance with his dignity as a son of the Most High. Coins and notes are a means to an end, and end that will not bring fulfillment.

How many wonderful deeds are aclaimed each day by the sons of men, yet how many are remembered soon after? Although regularly unseen by the world, the magnificent acts are acomplished in silence, without a trumpet blash, for the love and glory of God. 'Who is he, and we will praise him? For he hath done wonderful things in his life'. The just man will receive the approbation of the saints in light, and acknowledgement from the Father who scours the hearts of men and sees all that is done even in the dead of night. The saint is praised in accordance with right reason, the fool rejoices in deeds that lead to condemnation. We esteem those who have placed their bodies in danger for the sake of removing others from peril, how much more worthy are those of glorification and admiration who save a single soul from the clutches of Satan?

All men, conceived in original sin (unless preserved from this stain by a privilege from the Almighty) are subject to the law of the flesh and concupiscence, and suffer from a proclivity to evil. We will all be tried, which if done with a pure motive will lead to self-recovery in a more blessed state. It is only through trial, shame, rejection, that one is united to the Crucified Lord. The holy man refuses to submit to the malice, mores and values of those around him, and often experiences the declination of the crowd, yet he will be 'made perfect, he shall hath glory everlasting'. Our Divine Lord while on this earth, exhorted us to be 'perfect as your Heavenly Father is perfect', therefore let us take up his admonition and acquire the crown of righteousness. The quality of our physical bodies, however beautiful, can only reach a certain level, but on the other hand, spiritually we are called to live like angels of light.
Posted by Unknown at 01:27