Inclusion into the household of God is only for those who wish to be like God, abandoning what they known and loved. Without conversion they may exist with believers but will not be of them.
Posted by Unknown at 20:01 1 comment:

Reflection on God and Creation

God is no more wise or good in creating than if He did not create. The principle that the good is self-diffusive is preserved in the two immanent notional acts of the Blessed Trinity and does not lead necessarily to acts which terminate outside the divine essence.
Posted by Unknown at 17:25 1 comment:

The decisive movement of the human will to repentance can not occur without mercy already being offered to man. God does not efficaciously move the will to contrition if forgiveness is not already decreed.
Posted by Unknown at 17:03 1 comment:

Reflection on Charity and Debate

Charity should never signify indifference to truth or distinction in order to preserve a fictitious unity.
Posted by Unknown at 16:47 1 comment:

The benign neglect of the aristocracy in early modern Europe should be more preferable to the common man than the interventionist compulsions of the self-described compassion metropolitan elite.
Posted by Unknown at 15:50 1 comment:

The entire dogmatic treatise "De Deo Uno" is drawn necessarily from the principle that the essence and existence in God are identical.
Posted by Unknown at 22:08 1 comment:

Reflection on Experience and Wisdom

Lucid understanding of the principles of a matter unexperienced contributes more to wisdom than the mere presence at a chain of occurrences.
Posted by Unknown at 21:46 1 comment:

Reflection on Opposing the Death Penalty

To oppose the death penalty as an intrinsic evil is to transgress the bounds of Catholic probity. It is to consider falsely that natural death justly deserved is an unsufferable end in itself. This stems from pure naturalism and is a perversion of charity.
Posted by Unknown at 23:08 2 comments:

Reflection on Human Thought and Act

Human activity should be luminous in its principles and substantial in its execution.

Reflection on the Christian in the Modern World

No longer is the Christian tolerated as a well-meaning but fussy moral nuisance but is explicitly regarded as a serious threat to the stability of society. There must be no doubt about the opposition of the reign of Christ to the prince of this world.
Posted by Unknown at 21:20 No comments:

Reflection on Political Correctness and Individualism

The lumping of human beings into contained groups to fight some perceived ill is the very opposite of individualism. The persons concerned have no more in common than the label slapped upon them by some elite do gooder.
Posted by Unknown at 18:34 No comments:

Charity stems from the harmony of the soul with God which then spills out to our relations with others. It is fatuous to assume charity is the mere disposal of material items that have lived beyond their usefulness.
Posted by Unknown at 16:44 No comments:

On Three Persons, One Substance ''That in the Trinity there is no diversity or singleness or solitude, but unity and Trinity, and distinction and identity''

The Sentences of Peter Lombard,Book One, Distinction XXIII, Chapter 5.

As previously stated the proper object of the human intellect is the essences of material creatures. This must be humbly borne in mind as we attempt to climb to a knowledge of the divine essence. This is most particularly so when we are discoursing about the intimate life of the Blessed Trinity. Unless this were revealed to us, man could never have reached a sure knowledge of this, other than by the flights of fancy of certain creative poets and vain philosophers. As St Paul teaches in Romans and as upheld by the First Vatican Council, man comes to an objective knowledge of God by the ladder of created things, in which he apprehends the divine traces in the universe brought into being ex nihilo. As all things outside of God pertain to divine operation ad extra, it ''proceeds'' (in the order of freely willed creation) from the divine power which is common to all Three Persons. Therefore man in contemplating the world is only able to grasp the one God as the efficient and final cause of all.  In addition, our notions of God are utterly incapable of circumscribing the infinite perfection of the Godhead but as our Faith is of an objective character and our intellects have been given to us for profit, let us not indulge in mediocre complacency. The concepts of  ''person'', ''hypostasis'', ''essence'', ''nature'' and ''subsistence'' are grounded in the reality of our God, One and Three, however as we can only attain to an analogical grasp of the divine being we are constrained to recognise that the Lord as He is in Himself is vastly superior to our notions of Him. But let no Catholic contend that these nouns are misleading as they have been sanctified by the Tradition of the Church and utilised in the General Councils.
The oneness and the threeness in God are irreducible realities that must never be abandoned. The vocabulary developed in the 4th and 5th centuries presented Catholic truth that far surpassed the various heretical options expressed in those days. By asserting the oneness  (or consubstantiality) of the Persons, the doctrine of Arius is done away with. By proclaiming the threeness, Sabellianism is countered. Neither ''aspect'' of the divinity can be prioritised as through the other were merely a human imposition on It in order to communicate some mystery more effectively to man. The Blessed Trinity would have remained so even if no other being had been brought into existence. The Trinity would have existed if man had only come to know his creator as one.
He hold God to be sufficient in Himself, containing all absolute perfections in the higher reality of the Godhead. Yet, it is impermissible for us to consider the Divine Persons as somehow contained in this higher perfection. Each Person is not the Other Person but is what They are. This is what we allege when we speak of the irreducible nature of the oneness and threeness. There is nothing accidental in God.

Furthermore as Cajetan teaches, the divine reason is neither absolutely incommunicable nor absolutely communicable. No Person can exist without the Other as a real mutual relation exists between Them which can never be diminished nor altered. The notional acts form the Divine Persons Who are subsisting realities and more than simple relations. We hold to a virtual minor distinction between the Person and the essence so that there is no confusion between the Hypostaseis. In God, there is the most pure communion (circumincessio) between the Three, without division, separation or mixing. The Son is begotten of the Father (''neither necessarily nor freely'') without ever departing from the bosom of the First Person. The Holy Ghost proceeds from Both, from the one spirating principle without transgressing the divine essence. The Father does not exist alone as He is the eternal Father. The Son could not exist in solitude as He is the eternal Son of the Father. The Holy Ghost proceeds from the love of the First and Second Persons and ''seals'' Their perfect society. Solitude is therefore excluded from this communion of love.

Neither can diversity be used as correct terminology to describe the threeness of the One God. Each Person fully possesses by right the Divine Essence which can never be lost. On earth, in the mirror of faith, the Father is only implicitly included in our understanding of the divine being, but when we see face to face, directly and without mediation, He will be completely identified with the Divine essence.

Let us conclude with the wise words of St Hilary:

''The Lord says: Whoever has seen Me, has seen the Father (Jn 14:9). With these words, an understanding of singleness and aloneness is excluded. Indeed, the passage signifies that God is not solitary, and yet the statement teaches that His nature is undifferentiated. Indeed, the Father is seen in the Son by a united likeness of nature. For the begotten and the begetter are one; they are one, but one person. And so the Son is neither solitary nor single nor different''.

If gender is a mere social construct is it certainly impossible for anyone to be objectively "gay, lesbian, bisexual or transgender". Such denominations are therefore simply labels of fancy and reflect nothing more than a confused mind. You are incapable of loving another of the same sex if all gender  stems from only restricted cultural mores.

A writer should always aspire to be a faithful commentator rather than a muddled author. Truth serenely repeated is worth far more than straying creativity.
Posted by Unknown at 02:53 No comments: 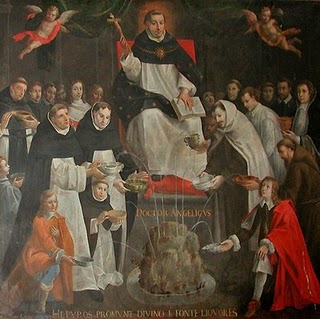 The following theological conclusions have been recently learned by myself

Whether it is possible for man to love God, the author of nature, above all things by natural powers alone?

1) In the state of pure nature (which never existed) God is capable of attaining to an elicited love of God as the Creator by human powers alone.
2) In the state of integral nature such that Adam originally experienced, humanity also had the above capacity.
3) These two states presuppose the activity of natural concurrence on humanity to reduce potentiality to the relevant actuality.
4) In all states (possible or real) it is utterly impossible for man to obtain a love of God above all things as the author of grace.
5) This is so as each act is specified by its formal object. It is not sufficient for us to state that a supernatural object may be loved by natural powers even if there be a supernatural mode to bring it about.
6) In fallen creation man is unable to produce an affectively efficacious love for God above all things. This is so as a weak man is incapable of performing a work that pertains to the healthy.
7) Man subject to the dictates of concupiscence prefers private immediate goods to his true and lasting end. Human nature is more corrupted in respect of the appetite for good than for the attainment of knowledge. A sin against the eternal law is indirectly an offence against the natural law.
8) As human nature is not destroyed by the fall and the disappearance of integral nature, there remains in him a natural inclination towards God as creator.
9) There also exists in man a natural love for happiness which is present necessarily and can never be effaced from human nature. God here is considered as insufficiently indistinct from multifarious good objects.
10) In addition, man can possess an affective love for God as the creator by human powers alone. There is nothing more than a complacency in God's goodness and general providence according to the natural order.
11) Healing grace is absolutely necessary in fallen creation for man to fulfil evens the precepts of the natural law.

This is the doctrine of classical Thomism which contains the authentic teaching of Saint Augustine as developed by St Thomas and his devoted followers.These conclusions are supported by the Councils of Trent, Second of Orange and Milevum among others.The preceding conclusions have been taken from the Theological Summa of the Angelic Doctor, I II, q 109-114 as expounded by Rev. Reginald Garrigou-Lagrange in his treatise ''Grace''.
Posted by Unknown at 02:11 No comments: